After a family friend dies of pancreatic cancer, high school sophomore Jack Andraka creates a better test for the disease for earlier diagnoses and treatment. 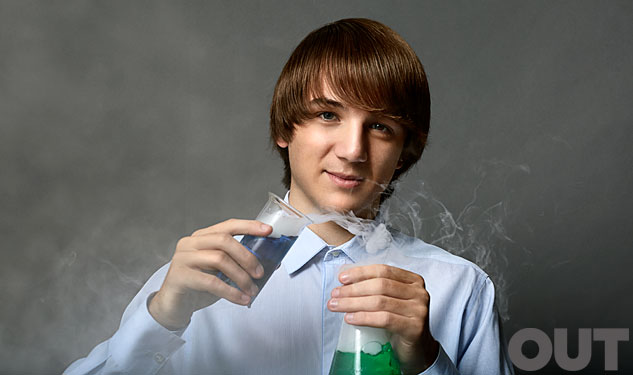 Jack Andraka was a freshman in high school when a family friend died of pancreatic cancer.  Coincidentally, he and his father, a civil engineer, had been testing the water in Chesapeake Bay using carbon nanotubes.  Smithsonian Magazine then describes Jack's "aha" moment during his biology class his freshman year,

"The Science paper he was covertly reading at his desk was about applications for nanotubes. With half an ear, Andraka listened to his biology teacher lecture on antibodies, which bind to particular proteins in the blood. Suddenly, the two ideas collided in his mind. What if he could lace a nanotube network with mesothelin-specific antibodies, then introduce a drop of a pancreatic cancer patient’s blood? The antibodies would bind to the mesothelin and enlarge. These beefed-up molecules would spread the nanotubes farther apart, changing the electrical properties of the network: The more mesothelin present, the more antibodies would bind and grow big, and the weaker the electrical signal would become. Other scientists had recently designed similar tests for breast and prostate cancers, but nobody had addressed pancreatic cancer. “It’s called connecting the dots,” Maitra says."

Based on this insight, Jack wrote up an experimental protocol and emailed it to 200 researchers.  Anirban Maitra, a Johns Hopkins pathologist and pancreatic cancer researcher, is the only one who responded:

"Andraka wrote up an experimental protocol and e-mailed it to 200 researchers. Only Maitra responded. “It was a very unusual e-mail,” he remembers. “I often don’t get e-mails like this from postdoctoral fellows, let alone high-school freshmen.” He decided to invite Andraka to his lab. To oversee the project, he appointed a gentle postdoctoral chemist, who took the baby-sitting assignment in stride. They expected to see Andraka for perhaps a few weeks over the summer.

Instead, the young scientist worked for seven months, every day after school and often on Saturdays until after midnight, subsisting on hard-boiled eggs and Twix as his mother dozed in the car in a nearby parking garage. He labored through Thanksgiving and Christmas. He spent his 15th birthday in the lab."

Based on his work, Jack went on to win the 2012 Intel International Science and Engineering grand prize of $75,000.

There are criticisms that both Jack himself and the media have overhyped his discovery.  Forbes put it this way,

"In one of the first stories about Andraka, Forbes Managing Editor Bruce Upbin asked: "Wait, Did This 15-Year-Old From Maryland Just Change Cancer Treatment?”  Nineteen months later, I feel safe answering: No, he didn’t. And I think it’s unfair to him, and to the work he did do, that we expected him to. Because what he did -- creating a cool biosensor while still in high school -- was pretty neat on its own."

To his credit, he has been open in public concerning the bullying he experienced after coming out as gay,

DtL: Have you ever experienced bullying?
Jack: I experienced pretty severe bullying when I was in 7th and 8th grade especially when I came out as gay. Many of my teachers that previously supported me, humiliated me in front of the class, I was ostracized by my classmates, and I had to eat my lunch alone in the bathroom. Because of this I struggled with depression and attempted suicide. However, what really helped me overcome this was throwing myself into my research and working on improving myself while trying to ignore the people that bullied me and sticking with the few friends I had. It definitely was difficult but eventually I got through it and I’m so glad.

It is important to publicize the bullying that many teens experience at many schools, especially LGBTQ+ youth.

He is certainly an amazing teen doer and thinker, and an inspiration to those applying for the Academy of Thought and Industry's "Best Teen Thinker and Doer" scholarship competition!