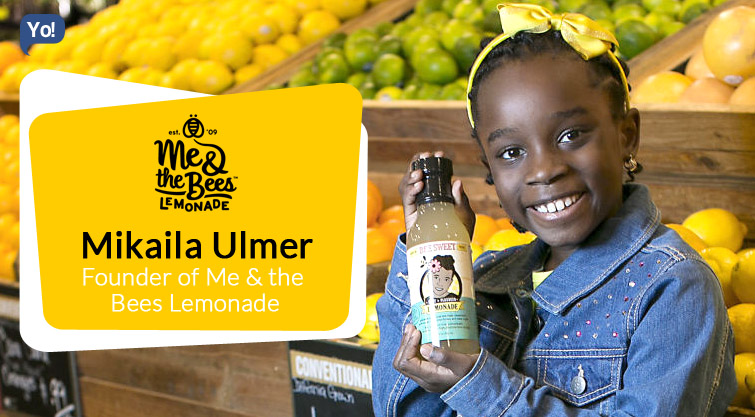 We continue to promote the ATI Scholarship Competition celebrating "Great Teen Thinkers and Doers" with a profile today of Mikaila Ulmer, founder of Me & the Bees. For details on our scholarship competition, see here.

Mikaila Ulmer began with a lemonade stand at the age of four. She had gotten stung by bees twice in one week, and in order to prevent her from fearing bees, her parents encouraged her to learn about bees. When she learned what the role they play in ecosystems, she made honey-sweetened lemonade with flax seed based on a recipe from her great grandmother.

By the time she was nine, she appeared on Shark Tank with her father, Theo. The previous year, they had been able to sell $25,000 worth of her "Beesweet" lemonade locally in Austin, Texas, including getting Whole Foods Market to carry it there. Her appearance on Shark Tank made her famous:

Mikaila began her pitch by asking the sharks when was the last time they had tasted something great, that also happened to be good for them. She revealed the conditions that had led to her inventing her product, her interest in bees, the business competition that she entered, and the old cookbook provided by her grandmother. She had developed Beesweet lemonade that was not only sweet and delicious, but it also contained healthy flaxseed and supported the local bee population.

Theo explained  there were currently four flavors available and that the flaxseed within the beverage made it one of the healthier drink options available to consumers.

Mikaila finished up by asking the sharks, "Which one of you will be sweet, join my team, and help me live my American dream?"

It was a good pitch, but a free sample was always likely to sweeten the sharks up, Mikaila had done her homework and was handing out samples before they could even ask.

By 2016, she had an $11 million distribution deal with Whole Foods across 55 stores with her product rebranded as "Me & the Bees." She introduced Barack Obama to the 2016 Women's Summit who replied, "I'll be out of a job soon - I hope she is hiring." She continues to attend school while also being the spokesperson for the brand that her parents help her to run.

Mikaila is definitely a great teen thinker and doer!