"I'm maybe learning more than they're learning, because I'm opening them up to explore what they really believe." 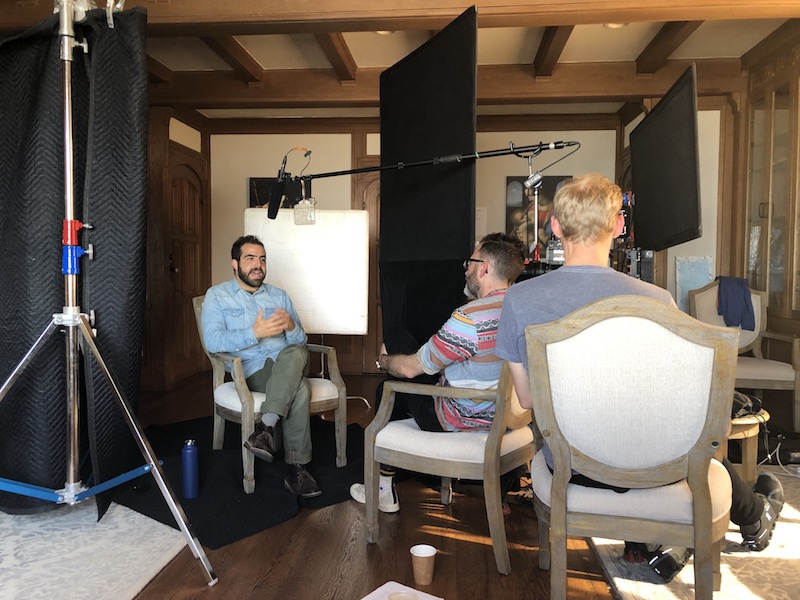 Bobby George, the Director of Content at Higher Ground Education, our parent company at ATI, sat down recently with Alex Gilman, a guide in humanities and life design in San Francisco, to talk about the students and their work at ATI. Meet Alex Gilman.

Can you introduce yourself?

My name is Alex Gilman. I'm a humanities guide and also a teacher in life design at the Academy of Thought and Industry.

What is Life Design?

Life Design is a course that really captures a lot of the dimensions of social-emotional development that isn't usually captured in other academic courses, in a high school or really in most academic settings.

It includes building communication skills and developing emotional intelligence, as well as working on things like goal setting, resilience through set backs, all the kind of emotional psychological skills that allow students to succeed, both professionally and academically as well as kind of build the kind of life that they really care about.

Where does life design come from?

Life design is actually a curriculum that had a total redesign from Michael's previous school. I had a big personal hand in developing the curriculum and the approach to it, so it was hugely influenced by a lot of the work I had done before working as a guide here at ATI.

Part of it was from my work as a facilitator in men's groups. I've been a facilitator and trainer in men's groups for several years, for adults, and mainly the skills that we worked on there were accountability and integrity, along with developing emotional intelligence. How do we know and understand what our emotions mean and what they tell us about ourselves and about what we believe and what we want?

We also work through things that are challenging, we develop resilience for setbacks, how to set goals and understand why we make the choices we make. All those kinds of things that operated in that group, I strove to integrate into a high school curriculum.

You also have to take into account where high schoolers might be at, the kinds of things that they care about. But what's super clear is that high schoolers have a lot going on in their relationships, and they have a lot going on in their emotional life, and so the goal was to create a curriculum and a design for a course that allows students to speak honestly and authentically about what they're really going through and then develop skills and frameworks for becoming more skillful in dealing with them.

Speaking about relationships, we've long had this picture of traditional education -- teachers in front of the classroom, mandating or dictating what happens. Can you talk about the relationship that you develop with your students?

I think an education that is focused on allowing students to excel on their own terms really depends completely on the individual relationships with the students. Something that is beneficial to one student might actually be the opposite of what another student needs -- which is both a huge challenge in the classroom and also a huge opportunity, because it allows us to really tailor the kind of support and training we do with the students.

It's getting to know their learning style, their temperament. Also, what are their challenges, and what are their strengths? How do we really leverage those so we can move students forward in ways that are meaningful to them?

It is tricky, because as a teacher, you want to have a plan of what you do, but if I'm really basing the class time on being responsive to the students, it means I really have to drop what my plan is to be adaptive and to be responsive to what they're bringing to the table. So a lot of times, I'm maybe learning more than they're learning, because I'm actually opening them up to explore what they really believe, what they think, what they're passionate about, and I'm responding to that.

In a lot of ways, I'm a student along with them.

I love that so much. What do you most value about working with students? What do you enjoy the most about it? You can do probably anything you want to do. Why are you here?

That's a good question. I think there's something so powerful and vibrant about an adolescent who is fully alive. I think it's a force that can't be compared to even an adult in the prime.

There's something special about that moment in between childhood and adulthood where all of the cognitive and emotional skills are there, but they're not fully formed, and they haven't yet formed their core self. They're still exploring who they are. They're still testing the edges of who they are and who they are versus their family and their peers, and there's just something so alive and almost electric about that time.

I think when I see a teen really growing or having a new insight, there's something really powerful and almost magical about it. It's really energizing, and that's what I'm really excited about.

In particular, I have been in a lot of places with really rigorous, intellectual inquiry, places of exciting cognitive and philosophical work, but there's not a lot of attention to the emotional life or the holistic wellbeing of the human. I always found that lacking, which forced me to really seek out other kinds of learning environments and other approaches to human development -- men's work, nature, mentoring, all these kind of alternative forms of education and learning.

What I found there is oftentimes a lack of intellectual rigor, which was frustrating to me, because I really wanted rigor. I wanted to understand the ideas and concepts underneath what we were doing in a really clear way.

ATI is one of the few places I've found that really seeks to marry those two -- intellectual rigor and depth -- along with personal, emotional, psychological, and a holistic perspective.

The emotional intelligence with the intellectual rigor is a powerful force, and it's also what I find as the most powerful in my own life. That really attracts me to this institution.

I think the two also really draw on each other in a way. Each is deepened by the other. It's not just that they're parallel issues that are equally important. I think they actually are mutually reliant on each other in a way that I can't really grow emotionally or psychologically if I can't also have this kind of precision in the way I think through things about myself, about my experience, and about my relationships.

At the same time, I actually think real intellectual insight -- really growing my beliefs, investigating what I believe, and opening myself to learning something new and being able to deeply listen to another person, expert or book -- takes a lot of emotional maturity.

What do you offer the students at ATI?

Our students could probably excel at any number of schools, right? And do really well. But what we offer in particular is for them to really hone their passion of what they're going to offer to the world and get really clear about that and then connect it to a more emotional, personal side so that they can develop a strong sense of why they're doing what they're doing.

The purpose behind what they're doing helps them to become better learners, because it helps to motivate them and helps them to be more deliberate in how they learn, but it's also what people really want.

What else do people want?

I think that's what the world needs, that's what the world wants, and that's the kind of qualities that we add to, among other things, but that's a dimension we add to these students who might already excel in other places, but we also give them the opportunity and support to develop as whole person, so they can say, "Here I am. Here's what I want to do, and here's how I'm going to do it well." People respond to that.

When I was a student, I saw how teachers responded to me -- I had this innate love of learning. And if you're a teacher in forensic science, for example, and you have this young person who comes up to you and has this well-developed and well-informed passion for it, compared to another student who just has good marks in science, who are you going to want to have as your intern? You're going to want to have the one who has a well-defined passion for this thing. That is the dimension of things I think ATI adds into the mix -- along with challenge, rigor, and academic growth.

Can you talk about the student projects?

So, a big part of our approach to college admissions is that colleges really want to see a student who has a well-rounded portfolio and is able to present themselves as an individual. Not only can they demonstrate mastery on an academic level, but they're also people who care about things and pursue them on their own initiative and are able to produce quality, real-world products. Right? Our students are exemplary in the way they approach college admissions because they will ask themselves, How do I take who I am and what I care about and produce things that demonstrate that in a compelling way to a public audience?

They do not at all sacrifice or betray their passions and perspectives to succeed in some sort of public way. Instead, they find a way to take whatever they are really passionate about and present it in a way that is compelling and interesting. Again, it's what the world wants.

To see a student really passionately digging into what he enjoys while also being really strong about his convictions and not afraid to have an opinion about something, but also really open to listening, it is an amazing thing to see.

However, one of the things I see in students a lot is that they completely underestimate their own brilliance. I truly believe that every student has some form of brilliance, and most of them can't see it. Even many schools only recognize certain forms of brilliance and completely ignore others. And so some students really underestimate their intelligence, their ability to think deeply about things, and to make compelling arguments.

With that said, throughout the year, I really focus on trying to mirror the brilliance in the students back to themselves, because I don't have to do the work. It's just them. When you encourage them, they really blossom. I see the students blossoming and becoming more confident their abilities, and it's great to see.